The disappearance of an opposition leader is part of a worrying trend.

Several small bombs went off in Dhaka Sunday, heightening an already tense standoff between the Bangladeshi government and protestors. The conflict began when the opposition Bangladesh Nationalist Party (BNP) called a strike last month in response to the disappearance of its organizing secretary Ilyas Ali on April 17. Mr. Ali’s car was found near his house at midnight—doors open, lights blinking. Neither he nor his driver has been seen since.

The BNP is now on its fourth strike since the disappearance, a two-day nationwide shutdown that ended Monday. At least six innocent people have been killed during the strikes so far. These are clearly unsettling law and order, if Mr. Ali’s disappearance didn’t make a mockery of it already.

The ruling Awami League denies any role in the disappearance and says that law enforcement agencies are trying to locate him. The BNP is loath to believe them, given widespread suspicions that certain agencies of the state have been involved in such disappearances in the past. The two parties and their leaders have been rivals for decades, but that’s not the only reason for this animosity. Common Bangladeshis are also disturbed by Mr. Ali’s disappearance, since it’s not an isolated case—only the most prominent of more than 100 similar ones in the past few years.

Like many developing countries, Bangladesh has had its share of political assassinations, extrajudicial killings and disappearances. But mostly these occurred in the 1970s, when the country was new and facing serious instability. Since the military stepped down in 1991 and allowed democracy to take some root, political strife has mainly taken the form of legal harassment and police brutality by the incumbent and national strikes and street violence by the opposition. These positions alternated between the Awami League and the BNP.

But during the BNP’s last tenure (2001-2006), the party broke the pattern and began to persecute the opposition more viciously than either party had before. The unprecedented torture of opponents and minorities violated the minimum protocols of rights and decency upon which democracies depend. The BNP reintroduced extrajudicial killings under an anticrime drive ironically named “Operation Clean Heart.” Those believed to be criminals, but hard to convict within a weak legal system, were captured and said to be have died of “heart attacks” while in custody. 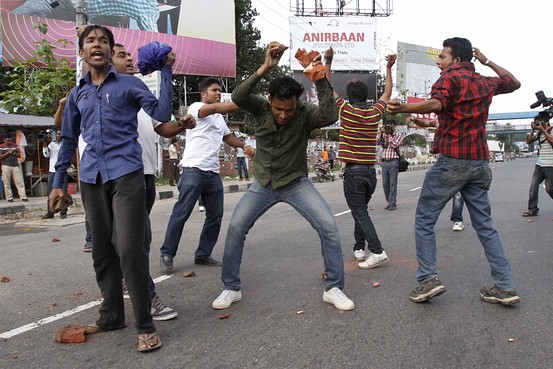 Associated PressBangladesh opposition activists shout slogans before they attack vehicles during a nationwide general strike in Dhaka on Sunday.

The operation proved popular with the general public, which was fed up with crime and with watching criminals dodge the legal net. Encouraged, the BNP created a new elite paramilitary force called the Rapid Action Battalion (RAB). This has since emerged as the country’s most effective crime-fighting force, continuing after the Awami League reclaimed power in 2009, though not without accusations of human rights abuses. Many alleged criminals in their custody are said to have died in “crossfire” while attempting to escape.

The public initially condoned such expedient dispensation of “justice,” but grew increasingly troubled by the body count. Because of sustained criticism at home and abroad, the incidences of crossfire subsided over the past two years.

However, it is widely believed that law enforcement has replaced crossfire with the new phenomenon of disappearances. Ain O Shalish Kendra, a leading rights group, puts the number of abducted at 100, of which 76 remain missing and the rest are dead. Another rights group, Odhikar, claims that of the 30 people picked up in 2011, 11 were taken by RAB, and the rest by other agencies of law enforcement.

That’s an even more damaging trend to law and order. In crossfire, at least one comes to know what happened to a person and also who might be responsible. In the case of bodiless disappearances, the perpetrators are cloaked from all accountability.

And the alleged disappearances by law enforcement have actually created more opportunities for criminals. In some instances, it is suspected that criminal groups have snatched people by pretending to be law enforcement. Debates are now raging as to whether Mr. Ali was abducted by a government agency or a private gang, with no definite clue in either direction.

Both parties are more focused on the political contest surrounding this latest disappearance, ignoring the more fundamental issue of basic rights and security in the country. The Awami League’s supporters, defending the party against the opposition, now point out that political assassinations occurred when the BNP was previously in power. There was a brazen grenade attack on Awami leader Sheikh Hasina Wajed in 2004, which killed and injured a number of party members. The BNP can also be criticized now for rallying only for its own leader, rather than for all the disappeared.

No matter what happened in the past, or the faults of the opposition, the government cannot avoid the responsibility of ensuring basic public security. Even if it is telling the truth about Mr. Ali, it is still responsible for a situation in which 100 people have simply gone missing. The onus of finding them or at least finding out what happened to them, and ensuring that this trend does not continue, remains on the government.

While the BNP is at fault for introducing extrajudicial killings, the Awami League is responsible for allowing such practices to continue and seemingly expand. Bangladeshi politicians are too often willing to accept any politically expedient measure—even if patently unethical or unlawful—when in power. They forget that every innovation in misrule may come back to haunt them in due course. If Bangladesh is to remain a democratic country, then extrajudicial killings and disappearances must cease immediately.

Mr. Ahmed is the vice president of the University of Liberal Arts Bangladesh.