Stop the hide and seek game;

( April 30, 2012, New Delhi, Sri Lanka Guardian) The time has come to respond from our side on an ongoing debate in Bangladesh over our recently published articles which have created fresh political ideological debate while questioning the present regime in the country. As usual, like other South Asian nations, the Dhaka government is playing foul game to hide their corrupt ferocious acts against their own citizens. Why are there so many distracting questions about the Sri Lanka Guardian, instead of conducting genuine investigations, based on facts, on the problems we surfaced through our reports? What we have done is to directly say to the “ostrich”, hiding its head in sand ‘it doesn’t work; your nudity is showing in public. Just lift your head out and face the need to restore freedom, justice and fraternity in the country, within genuine institutional framework. 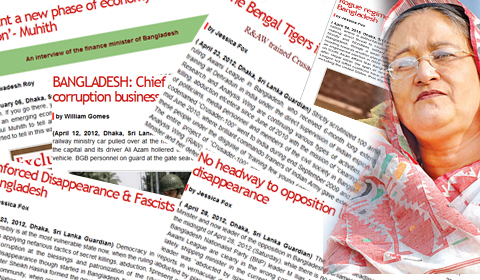 It would be surprising if the Dhaka government decides to block the Sri Lanka Guardian for its viewers in Bangladesh, as did the paranoid Sri Lankan government for our dear readers in Sri Lanka. Killing the messenger is popular tactic used by many failed governments trying to stay in power.

One of the local language daily newspapers based in Dhaka has carried the story while quoting a source of the Sri Lankan High Commissioner’s office in Bangladesh, saying that the Sri Lanka Guardian doesn’t exist. It seems that the “source”, told the paper there is no such paper published from Colombo. The person’s claim is correct in term of wording as we have been operating from abroad since 2009 due to the present regime’s policy on freedom of expression. Otherwise the “White Van” is likely to solve the problems in its way, similar to how the Rapid Action Battalion (RAB) in Bangladesh acts. But the person seems to not recognize that well known Sri Lankan diplomats have been contributing to the Sri Lanka Guardian since its inception in August 2007. We are not going to talk now, about our (Sri Lankan) diplomats; how they were appointed and how they are working towards weakening our foreign policy.

The Dhaka government and/or its allied news agency do not need to fear the Sri Lanka Guardian, but their own inhuman activities against unarmed innocent civilians and dissenters. What we have facilitated is to highlight factual reality in the country while allowing few contributors including pro- Awami league writers, who have different political ideologies to the Government, to share their wisdom with wider public through their contributions to the Sri Lanka Guardian.

Recently Prime Minister Sheikh Hasina soughed in public that no one has the right to play with people’s fate. Unfortunately she and the others who are benefiting from her side are portraying themselves as being innocent on the stage but one sees an alien behavior behind the screen of “patriotism” and “national security”. In other words, the present regime of Bangladesh is using their fellow citizens as the medium to get rid of their personal banalities.

There is documented evidence that 31 persons have been killed extra judicially in the first three months of this year. It has been reported, that among the 31 persons killed extra judicially, 26 were killed in ‘crossfire/encounters/ gun fights’. Among the deceased, 17 were allegedly killed by the RAB, three by the Police, two jointly by the RAB and the Police, and four jointly by the RAB and the Coast Guards. Torture in custody persists while forced disappearances are continuing. During the three months (January-March) 2012, three persons were allegedly tortured to death. It has been reported a Dhaka University teacher was beaten by RAB, which is the rough murderous unit setup by the regime in the name of national security. As we compare, there are more similarities between the White Van syndrome in Sri Lanka and the RAB in Bangladesh which is reported to have tortured and killed dozens of people. Ms. Hasina, this is real nudity of your ‘alien (barbarian) governance against your own people, while claiming that no one has the right to play with people’s fate. This is a tragic joke.

We stand with the people of Bangladesh and we will continuously publish balanced factual reports on the country as well as other countries if required. As declared in our mission statement, we adhere to the journalistic values of honesty, courage, fairness, balance, independence, credibility and diversity, giving no priority to commercial or political considerations over professional ones.

It would be surprising if the Dhaka government decides to block the Sri Lanka Guardian for its viewers in Bangladesh, as did the paranoid Sri Lankan government for our dear readers in Sri Lanka. Killing the messenger is popular tactic used by many failed governments trying to stay in power. However, it has been proven that our reports hit the nail on the head and expose failure of the government’s puny dopey politics against the people. Like the present regime in Sri Lanka, the Dhaka government also is following what, the Bangla proverb says, “The deer has enemies because of its flesh”. People of Bangladesh will look and take necessary objective actions against the subject on time unless the Dhaka government blindfolds its people in Bangladesh before then. In other words, “the eyes are the mirror of the mind” (Chokh Moner Ayna). We are not asking for Justice when justice can be bought; we will never ask people to act when there are no people. We surface questions because we see possibilities of the dawn of justice in the horizon.